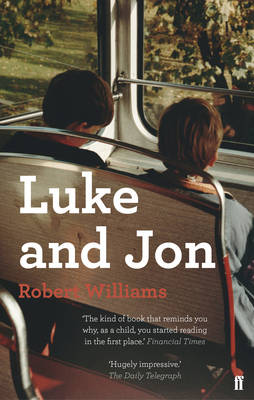 ‘Luke and Jon’ is a heart-warming tale of Jon who, after the death of his mother, moves to a scruffy northern town with his almost entirely mute father who is drinking heavily. Jon meets Luke, a boy in 1950s clothes with a side parting and a twitch. The kids at school refer to Luke as “slackjaw”. Luke has a secret, though, and when Jon finds it out it changes everything for Jon and his dad.

‘Luke and Jon’ is a coming of age story about family, death, depression, friendship and redemption. Robert Williams’ debut novel is really impressively written and has a lot of heart. It’s not all doom and gloom, though, it’s heart warming and, at times, funny.

Shortlisted, rightfully, for several awards, ‘Luke and Jon’ won the Betty Trask Award – and rightfully so.

This entry was posted in Books, reviews and tagged book, father, friendship, story. Bookmark the permalink.