Getting to Know You: Leon Steelgrave

Today I’m happy to host author Leon Steelgrave. He’s here to tell us a little bit about himself and his writing. I hope you all enjoy! 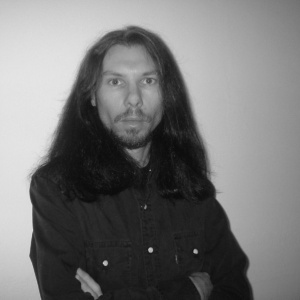 Much of my work involves a strong visual element, the setting up of a scene against which the characters can act, which is a result of my love of film and comics. I usually start with a series of tableaus in my head from which I work my way backward in order to figure out how the characters arrived there. As such, it’s not unusual for me to write the end of novel after completing the first quarter or so of the initial draft and then dovetail it into rest of the manuscript.  But if I’ve learned nothing else, there is no “right” way to write a novel.  This is what works for me.

In terms of influences, I spent most of my teens and early twenties reading the works of Michael Moorcock, Ian Fleming and Raymond Chandler.  But the biggest influence during this period was undoubtedly the British Science Fiction anthology comic ‘2000 AD’.  I started reading it when I turned twelve and I’m still reading it as I rapidly approach forty!  Whether it was prejudice against mutants in ‘Strontium Dog’ or a white supremacist Earth crusading against aliens in ‘Nemesis The Warlock’, writers such as John Wagner, Alan Grant and Pat Mills were using the medium of comics to talk about racism, fascism – bigotry in all its insidious forms.  A medium for fools and children?  I don’t think so.

Fans often speak about a Golden Age of ‘2000 AD’ in the 80’s which coincided with the emergence of the graphic novel as means of telling adult stories.  This was the time when Alan Moore and Frank Miller were breaking new ground with Batman in ‘The Killing Joke’ and ‘The Dark Knight Returns’, not to mention Moore’s seminal work ‘Watchmen’.

The peak of all this activity for me came at the close of the decade with the launch of Neil Gaiman’s mythology and literature referencing ‘The Sandman’.  The story centred on a family of seven siblings each of which was the anthropomorphic personification of a concept such as ‘Destiny, Dream, Destruction’ etc.  Death was portrayed as a cute and incredibly perky Goth chick, which for someone involved in the 80’s Goth scene held an obvious appeal.  We’ll return to Gaiman’s Death a little later.

In light of the above, it will come as no surprise that my original writing ambitions were focused on comics.  My output during my teens was limited to a couple of frankly awful scripts.  Fate, however, intervened in the early 90’s when Virgin Books announced the publication of a series of ‘Judge Dredd’ novels.  Seeing this as a potential in to getting work at ‘2000 AD’, I duly sent off my first submission.  It was rejected, along with my second and a third and final strike.  Disappointing as this was it served two valuable purposes.  First, as each submission required a 5000 word synopsis together with a 15000 word writing sample, it taught me the discipline required in producing lengthy pieces of prose.  Secondly, the editorial comments were positive enough to convince me that I had some talent as a prose writer.

My debut novel ‘White Vampyre’ came about when a poem written by close friend collided with one my of my rejected ‘Judge Dredd’ proposals.  I took the relatively mundane story of a gritty, futuristic vice cop and added to it the anthropomorphic personification of his drug addiction in the form of Lady Methedrine.  At the time I wanted to create my own version of Gaiman’s Death but arrived at the complete opposite.  Where Death was kind, caring and represented unconditional love, Lady Methedrine embodied an all consuming and destructive love, a love that demands total subservience.  It might not have been my conscious intention but the result served the story far more effectively and made her a tremendously fun character to write.  It’s left to the reader to decide if she’s a supernatural being or nothing more than part of Brecht’s drug induced psychosis.  Having said that, it’s fair to say that on another level she can also be considered Brecht’s Anima, and provides a useful Deus ex machina.  Hard working girl, our Lady Methedrine!

I’ve spoken elsewhere about the rather lengthy genesis of ‘White Vampyre’ and will confine myself here to saying a revised Kindle Edition is available from Amazon.

This entry was posted in Author, Getting to Know..., Writers and tagged character, stories, story, write, writer, writing. Bookmark the permalink.

2 responses to “Getting to Know You: Leon Steelgrave”