Getting to Know You: Shelley Day

I’ve been lucky enough to meet Shelley Day many times over the years at book events. I’m really chufffed to have her on the blog today to talk about her debut novel, ‘The Confession of Stella Moon‘. I’m also tremendously excited to be attending her book launch in Newcastle next week. Your time has come, Shelley!

I’m so excited to read another crime book set in Newcastle. Tell me about your debut novel. What inspired it?
Thanks for inviting me onto the blog Vic!

My debut novel ‘The Confession of Stella Moon‘ is Domestic Noir and is indeed set in Newcastle! Well, it’s partly set in the city – in a semi-derelict boarding house in Heaton – and partly up on the Northumberland coast, in a run-down beach hut on the dunes between Beadnell and Embleton. I grew up in the North East, and although I’ve lived in a lot of different places, and I currently spend a lot of time in Scotland and Norway, the North East is my Home with a capital H. I belong here and it always pulls me back! I guess it’s these long-standing connections to this place that kind of inspired the book.

‘The Confession of Stella Moon‘ is being published as a crime novel, but it’s not a police procedural, or a whodunit. It’s more of a whydunnit, an exploration into the psychology behind the crime.

My publisher came up with this amazingly macabre-sounding strap-line which does actually capture the theme of the book: “Because dark secrets don’t decompose.”

It’s a novel essentially about a family secret. A black, brooding tale of matricide set in 1960s and 70s Newcastle in a family so dysfunctional it’s sinister. After serving a prison sentence for killing her mother, young Stella Moon is discharged to restart her life. But her plans are soon ruined when she falls prey to a dark family secret that pulls her back into the past. Strange rituals, shame and paranoia haunt her, like the persisting smell of her mother’s taxidermy in the abandoned boarding house. Stella is caught in a tangled web of guilt and manipulation.

I have a background in both law and psychology, so I’ve drawn on what I know about those things to write this novel. 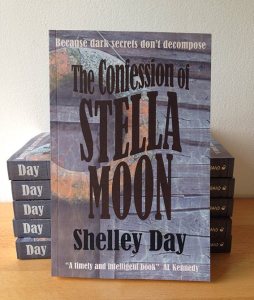 Tell us about Stella, your main character.
The entire novel was built around the Stella character. She came to me first and essentially the novel is her story.

Stella was born at Moniack Mhor, a remote Writing Centre up beyond Inverness. I’d gone there on a week-long Arvon residential writing course after I took redundancy from work. The tutor was Patrick Gale. It was in one of the writing exercises that Stella appeared, fully formed. As soon as she was there, I felt I knew her, and I just knew she and I were going to spend a lot of time together. It was Patrick who said I should put Stella into a novel. I thought about it, but I couldn’t do it straight away ‘cause after my redundancy, money ran out, I was flat out freelancing. So it wasn’t until years later that I sat down and wrote Stella’s story.

I wrote the very scrappy first draft during NaNoWriMo 2010. Stella has been described as a ‘disturbed and disturbing’ character. People say she gets under your skin. One agent – who I didn’t go with in the end – found Stella ‘haunting, difficult to put out of her mind…’ But Stella is also haunted, by the past, by the house, by the family secret she discovers. I hope readers will be rooting for her from the start because, as a character, she’s the kind of person who deserves support. I hope people will want to find out whether she makes it! Although she’s served a prison sentence for killing her mother, there’s a whole story behind her terrible crime, and basically the whole book is trying to ferret out what’s actually going on and asking questions about where criminal responsibility lies.

What can readers expect from your book?
My novel, on the face of it, is a story about a matricide, about a young women who’s released from jail only to find herself further imprisoned, but this time by the past, by conspiracies of silence, by a grim family secret she knew nothing about.

But it also tackles bigger themes –  mothers and daughters, for example. And I’ve already mentioned criminal responsibility. Readers can also expect a strong psychological dimension – about memory, and about the effects trauma can have on what you remember and how you see things. It’s about the longer-term effects of ‘abuse’, about how family secrets can blight a life.  At another level, it’s a story about how difficult it is to put together a coherent life story … I can’t really tell you any more without introducing spoilers, so I will shut up now!

AL Kennedy once told a writing group I was in: Fear is the main thing that stands in your way. It’s only fear you have to be afraid of. Now I think that’s a very basic lesson all new writers need to learn as soon as they can. If you can learn to put that fear to one side and let yourself get on with your writing, regardless, you are more than half way there. It’s easier said than done though! But it is possible to do it, and to do it again, and again … Really, starting to write is all about giving yourself permission; permission to take time out of your life to sit down and write, permission to write something far less than perfect for the first draft, permission to soldier on despite the fear of the page, of the pen, of everything. You just have to give yourself permission, and off you go. And keep going. And just keep going.

You have to develop a thick skin, coping with rejections is not the easiest thing, but you have to get used to them, and to try and learn from them. Another friend said: the successful people are the ones who haven’t given up. I keep remembering that.

Finally, a warning. Writing is difficult. It’s difficult because it can mean you are drawing on deep-down bits of yourself that, frankly, would prefer to be left undisturbed. So writing can churn you up. There’s no way this can be avoided in creative work. But if you know in advance that you’re setting off on a bumpy road with potholes and cliff edges and the prospect of stormy weather, you can at least pack a decent raincoat.

I love that analogy! What do you like and dislike about writing?
I don’t like writing. I can’t say I like sitting down and writing. There are a million things I would rather do and I will try all ways and means to avoid it. But equally, writing is a compulsion; I can’t not do it. If ever there is a time when, for whatever reason, I really am not writing, I don’t feel good at all.

What I like is having written. It’s a very good feeling when you have written something that’s not half bad and you know you’re going to be able to turn it into something worthwhile. That is what’s enjoyable. I’m compelled to write, I think, because writing is the only thing that makes me feel good about myself. That’s what keeps me doing it again and again.

Are you writing anything at the moment?
I am working on a short story collection. ‘A Policy of Constant Improvement‘ will be out in 2017. In 2015 I won a Northern Writer’s Award for it and am extremely fortunate to have been mentored by Carys Davies! And I’m working on a second novel. The protagonist is called Clara. As with Stella, I’m deeply attached to Clara even though she is leading me something of a merry dance at the moment. The working title is ‘Clara Says’ but I have a much more interesting one up my sleeve! I can’t tell you any more because I’m scared of putting a jinx on it!

Thanks sooo much for having me on your blog. And I really hope you enjoy ‘The Confession of Stella Moon‘!

One response to “Getting to Know You: Shelley Day”