Friend of the blog, Shelley Day recommended the lovely Catherine Simpson to review her 2016. It’s always fun to find new authors and, from what I’ve been told, Catherine is definitely one to watch! You can find Catherine on Twitter and at her website.

Thanks for being involved in the 2016 review, Catherine – hope to host you again soon! 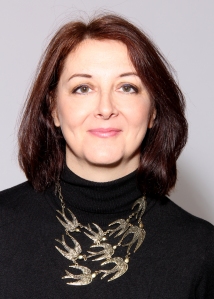 Do you have a favourite memory professionally from 2016?
My novel Truestory came out late 2015 with Sandstone Press so the first half of 2016 was largely spent promoting it and there were some great moments, including appearing at Aye Write in Glasgow, having my own event at the National Library of Scotland and sharing an event at Edinburgh Central Library with my daughter, Nina, for Autism Awareness Week (Nina is autistic and it was raising her that inspired my novel).

This year I also mentored two young writers for the Scottish Book Trust’s fantastic ‘What’s Your Story’ project and I was honoured to work with Artlink Edinburgh to write about the experiences of autistic people for the Midlothian autism strategy.

These are all happy professional memories but probably the most surreal memory was in February arriving at Hawthornden Castle in Midlothian for a writing fellowship and standing in my tiny castle bedroom overlooking the old keep, which was glittering with frost, knowing I was to share this amazing place with five strangers for a month.

And how about a favourite moment from 2016 generally?
This year my husband and I pulled off a long-standing plan – to get our younger daughter settled at university and then move back into Edinburgh city centre from out of town. It went like clockwork. Lara moved to Glasgow to begin her degree in Education on the Monday and we moved to a flat right in the heart of the city on the Thursday.

Favourite book in 2016?
I’ve been getting more and more interested in poetry this year and have been rather pre-occupied with the subject of death so I have particularly appreciated Undying, by Michel Faber and The Drift by Hannah Lavery.

Favourite film in 2016?
I tend to watch films years after they come out – I recently watched Capote (2005) about the selfish, obsessive Truman Capote and how he came to write In Cold Blood. I also saw Little Voice (1998, for goodness sake!) about a young girl obsessed with 1950s/60s singers – a character that my daughter pointed out was autistic.

Favourite song of the year?
Not new either but Wanted on Voyage by George Ezra was stuck in my car CD for the first six months of the year.

Any downsides for you in 2016?
The never-ending terrorist attacks have been shocking.

Are you making resolutions for 2017?
I love nothing more than to set a goal or two at this time of year.

During 2016 I completed the first draft of what I hope will be my next book – a memoir about the suicide of my sister. In 2017 I plan to rework it into a final version.

I will also write a series of smaller pieces inspired by Dunbar to perform at Coastword Festival.

What are you hoping for from 2017?
I am looking forward to seeing my novel Truestory translated into Danish and published in Denmark.

I am Creative Writing Fellow for Tyne & Esk Writers until March 2017 – and I look forward to supporting the very talented and dedicated writers in the groups.

I am also delighted to be a Writer in Residence at Coastword Festival – a small but perfectly formed festival of music and word – to be held in Dunbar in May 2017. I hope for a sunny weekend shared with lots of super-talented artists of all kinds.

One response to “Review of 2016: Catherine Simpson”