Today, my friend Jennifer C Wilson joins us on the blog to talk about her first foray into self-publishing with her upcoming novella ‘The Last Plantagenet?‘ which is available to pre-order now.

Having the opportunity to edit this novella, I’ve had a sneak peak and I recommend that you seek it out immediately.

Hi Victoria, thanks for kindly asking me to visit your blog again today, for the launch of ‘The Last Plantagenet?‘, my new time-slip romance novella. As well as being my first foray into time-slip (and romance, for that matter), it’s also the first time I have self-published anything.

It’s been a nerve-racking experience, getting everything ready in time for my self-imposed publication date of 2nd October, to tie in with the birthday of my leading man, Richard III (obviously…). I’m really lucky to have had beautiful artwork, from Soqoqo Design, and of course your good self to review and edit the content, but I’ve still been having nightmarish visions of people opening the ebook on the morning, and finding blank pages, every other word missing: the usual frets!

But it’s still been fun, and definitely an experience I’m not afraid to repeat, if another idea strikes me. 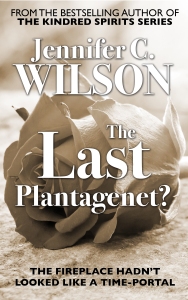 ‘The Last Plantagenet?‘ follows Kate, as she goes out for a relaxing day at a joust re-enactment at Nottingham Castle. All is well, until the rain starts. Here’s the opening scene, to whet your appetite…

The fireplace hadn’t looked like a time-portal. Of all the things flying through Kate’s mind as she gazed around the chaos that was the medieval kitchen, that was the one that stood out.

It was meant to be just an ordinary Saturday. A blissful day, enjoying the pounding of hooves cantering around the grounds of Nottingham Castle. Kate had relaxed for once, watching a re-enactment of the Wars of the Roses, celebrating the town’s part in King Richard III’s fateful final few weeks, as he travelled to Leicester to meet Henry Tudor, and his fate at Bosworth. As an avid fan of the period, it was Kate’s perfect Saturday, watching the actors in their armour or fine costumes. She meandered between the stalls, ate her fill of food from the time, and absorbed the atmosphere, enjoying a break from the drudgery of real life. Now, full of roasted chicken and mulled wine, even in the middle of summer, Kate was casually forgetting the accounts she knew she had to settle when she returned to the office on Monday morning. So few of the re-enactments Kate had watched featured Richard III as the hero of their piece, and yet, here he was, taking centre stage, just where he belonged in Kate’s opinion. Too many documentaries, plays and other works cast him as an evil, power-grabbing, child-murdering maniac; today, he was just as she had always pictured him – a man doing his best, no worse than any other medieval monarch, who fell foul of Tudor propaganda. Kate had always supported the underdog, she thought as she wandered around the tents, and Richard was certainly that.

But then the rain started. A summer storm, Kate decided, ignoring the gathering clouds for as long as she could, but once the heavens opened, they refused to close, drenching everyone to the skin as they ran for cover. Ducking inside, Kate found herself standing in front of the former kitchen’s grand fireplace, flickering away with fake, LED flames, fake meat roasting on fake spits. A clap of thunder made Kate jump, causing her bag to slide off her shoulder and in amongst the ‘burning’ logs; she leant in to retrieve it, just at the moment the first bolt of lightning struck.

In a heartbeat, the world went black.

It’s been fun spending time with a version of Richard III who’s actually alive for a change, rather than a ghost. I’ll be having an online launch party on the evening of 2nd October to celebrate the release – visit my Facebook page for more details, and to get involved.

And now, it’s back to my ghosts, as I’m working on what I hope will at some point become the third Kindred Spirits novel, exploring the ghostly community of Westminster Abbey. With over three thousand people buried or commemorated in there, there’s a pretty large cast of characters to choose from!

Jennifer is a marine biologist by training, who spent much of her childhood stalking Mary, Queen of Scots (initially accidentally, but then with intention). She completed her BSc and MSc at the University of Hull, and has worked as a marine environmental consulting since graduating. Enrolling on an adult education workshop on her return to the north-east reignited Jennifer’s pastime of creative writing, and she has been filling notebooks ever since. In 2014, Jennifer won the Story Tyne short story competition, and also continues to develop her poetic voice, reading at a number of events, and with several pieces available online. She is also part of The Next Page, running workshops and other literary events in North Tyneside.

Jennifer’s debut novel, Kindred Spirits: Tower of London, was released by Crooked Cat Books in October 2015, with Kindred Spirits: Royal Mile following in June 2017. She can be found online at her website, on Twitter and Facebook, as well as at The Next Page’s website. Her time-slip historical romance, The Last Plantagenet? is available for pre-order, and on sale from 2nd October 2017.