Ahem, sorry. Following on from Mr Broadfoot, Mr White joins us to review his year. I’ve had the pleasure on hosting both Neils at Noir at the Bar Harrogate this year so it’s a delight to have them on the blog today.

My thanks to Neil for sharing his year with us. Come back tomorrow for a gift (or three) from me.

Do you have a favourite memory professionally from 2017?
The release of my most recent book, From The Shadows. It felt like a long time coming after the delays in the publication of my last book with my previous publisher. It felt so good to have the new series up and running and in the shops. 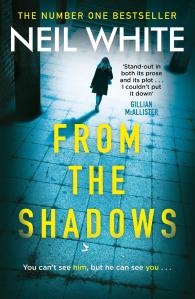 And how about a favourite moment from 2017 generally?
Personally, I had some great fun. The festivals were as great as ever, Crimefest and Harrogate, and 2017 felt like it was a fun year. More of the same please.

Favourite book in 2017?
All The Wicked Girls by Chris Whitaker. It was another great book by a fantastic writer. He is also, rather annoyingly, a good bloke, witty and engaging. I could grow to hate him.

Favourite film in 2017?
Can I cheat and pick a TV series? Thought so. Godless, a seven-part western on Netflix. I thought everything was great about it. The visuals, the story, the acting, the scenery.

Favourite song of the year?
I’ve got into country and western a lot more this year, and I confess to liking some of the cheesier stuff, the pickup truck country music. It’s not from this year, but I’ve been playing this song a lot more when I go on my late night Youtube hunts, and it’s Wagon Wheel by Darius Rucker. Lyrically it’s very good, but also very singalong

Any downsides for you in 2017?
The only bad experience I can think of is a trip to Stockholm in June, when I headed out for a three-day bender, er, sorry, cultural experience, with an old friend. Unfortunately, my friend had to pull out at the very last minute, so I went anyway, wandered up and down Stockholm for the afternoon, sulked, and got the first plane home.

More widely, the turn taken by social media has been a downside, where Twitter has become just somewhere to avoid. I think the world as a whole would be a better place without it.

What are you hoping for from 2018?
To be able to answer the same question this time next year.

This entry was posted in End of Year Reviews, Review of 2017 and tagged book, Crimefest, Harrogate, publication, publisher. Bookmark the permalink.