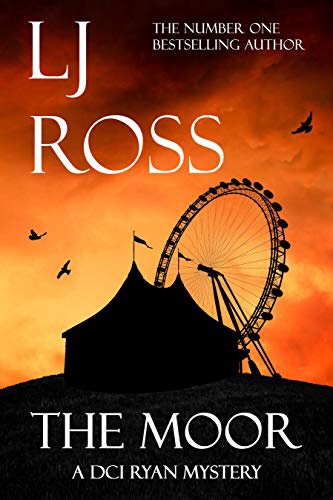 A ten-year-old girl turns up on DCI Ryan’s doorstep to tell him she’s witnessed a murder. He has no idea he’s about to step into his most spellbinding case yet. The circus has rolled into Newcastle, bringing its troupe of colourful characters including acrobats, magicians, jugglers. However, despite the joy they bring to many, one of the members of the circus is a killer.

Ryan and his team must break through the secretive community to uncover a secret which has been hidden for eight years, to save the only living witness before the killer  strikes again.

If you’re from the North East, you’ll be familiar with the Town Moor but even if you’re not, you will enjoy ‘The Moor‘. As always, LJ Ross has managed to create a compelling narrative which draws the reader in, combining excellent local knowledge and descriptions with human interest. As with her previous novels, ‘The Moor‘ is easy to read and whips along at a good pace.

I love reading the DCI Ryan novels – it’s like catching up with old friends. It was an absolute delight to see the development in Frank and Denise in ‘The Moor‘.

LJ Ross has created nuanced characters with pathos which keeps me coming back for more. I really enjoy the fact that, despite Ryan and his team being called to investigate gruesome murders, Ross keeps the novels light with plenty of banter and light-hearted humour. The drama, although very dark at times, never feels too depressing due to the lightness that Ross weaves through her stories.

Ross handles the portrayal of a much-maligned community sensitively and the story doesn’t feel exploitative.

Thankfully, it’s not long to wait until the release of the next DCI Ryan novel. You can pre-order ‘Penshaw‘ now.