**I Will Miss You Tomorrow Blog Tour** 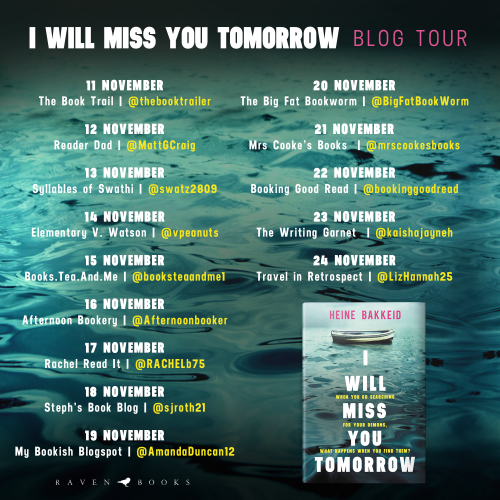 I’m really pleased to be taking part in the blog tour for Heine Bakkeid’s ‘I Will Miss You Tomorrow‘, the first in a new Norwegian crime series.

Fresh out of prison and a stint in a psychiatric hospital, disgraced ex-Chief Inspector Thorkild Aske only wants to lose himself in drugged dreams of Frei, the woman he loved but has lost forever.

Yet when Frei’s young cousin goes missing off the Norwegian coast and Thorkild is called in by the family to help find him, dead or alive, Thorkild cannot refuse. He owes them this.

Tormented by his past, Thorkild soon finds himself deep in treacherous waters. He’s lost his reputation – will he now lose his life?

My thanks to Raven Books for inviting me to be a part of the tour and to Heine for taking the time to answer my questions.

Tell us a little about yourself…
I grew up in the North of Norway, in a place called Belnes. Just five houses, with the polar night looming above, the mountains behind us and the sea in front. It’s the kind of place where, as a kid, you can run around all day, play, and not see another human being. I used to read a lot, and developed a sturdy imagination, something that resulted in me getting lost I my own thoughts whenever and wherever I was. I still get lost in my own thoughts, usually thinking about characters I have created/want to get to know better, scenes I want to write, plots, and forget that I’m with other people, people that expect me to answer back when they talk to me. (My wife especially, finds this hilarious😊) Growing up in such a small place, you kind of get to be comfortable in your own skin and being on your own. Becoming a writer was therefore the perfect match for me, also because writers are often easily forgiven for being kind of weird sometimes, so …

And what can you tell us about ‘I Will Miss You Tomorrow’?
One of the things that has always fascinated me is how men, the kind of men I grew up around, handled their problems. It’s kind of expected that you sort yourself out and get on with your day. The main characters in crime fiction always seem to have certain traits; when you first meet them, they are broken in some way or form, and I always wondered why. How did they get there, to this point? So, when I first started writing about Thorkild Aske, I knew that this was something that I wanted to explore in the series. But also, what happens with a lone investigator-type, who doesn’t even want to fix himself, who can’t put himself together and just get on with it, but who actively sabotages his own well-being. So, when we first meet Thorkild in ‘I Will Miss You Tomorrow‘ he’s just been released from prison, has lost his job as an Interrogation Officer with the Internal Affairs and is heavily abusing the pain medication his psychiatrist has given him. He is then forced to travel to the far north to investigate the disappearance of a young man who was renovating an old light house. What he then finds, is a young woman without a face in the breaking sea.

How long have you been writing?
I started writing in my late twenties in 2003. I was studying programming in Stavanger and was well on my way to become a System Developer. Being a writer isn’t really something people from where I come from see as an option. Programming is as close to the inner circles of hell as you can get; it’s so structured, narrow, and has no freedom to go beyond the boundaries of the programming language, and I hated it.
One night, I had been hung up on this scene with this character (which later became Thorkild Aske) for a whole week and couldn’t sleep, so I just got up and started writing, hoping the scene would go away so that I could get some sleep. I wrote about fifty pages the following days, but quickly realized that I was way too young to write about such a character and decided that I was going to wait with the Thorkild Aske books until I got older.
But I still loved writing, this new-found way to escape the pains of programming, so I just kept writing and finished my first novel for young adults the same month as I completed my bachelor’s degree. I told myself that if the manuscript got published, I would become a writer, and if not, I would go on to my Master’s degree and slowly die, one day at a time, in some stupid office.

What was your journey to publication like?
I still know by heart the first line in the official letter from the publishing house that took on my manuscript. They had sent the manuscript to a well-known Norwegian YA-author who was consulting for them. “Finally, something that is pure gold, in an otherwise regular work day where everything is just so-so.” (I’m really butchering the English language on this one😊) So, with those words in mind I felt that I had moved a couple of inches away from that office space in hell, and decided to tell my wife that I was starting over again, from scratch with only my student debt in my backpack. I was going to become a writer. The book got published in 2005, and three years and three books later, in March 2008, I quit my day job and became a writer full-time.

Are you working on anything at the moment? Can you tell us about it?
Right now, I’m working on the fourth installment of the Thorkild Aske series. The story takes place in Stavanger, where the police have just dug up the body of one of their own, a dirty cop who went missing in 2011, a man that Thorkild Aske shares a personal past with. This one is going to get pretty intense.

What do you like most about writing?
As I said in the beginning, for as long as I can remember, I have been reading and making up my own stories and creating scenes in my head. Becoming a writer was the perfect outlet for this affliction. Telling stories is also the one thing that makes me truly happy.

What do you like least?
Editing. If I find a better way to tell a story, I will go and rewrite. This makes the editing process longer and more painful.

What are you reading at the moment?
‘The Secret History‘ by Donna Tartt. Very promising😊

Who has been the biggest influence on your writing?
The Norwegian writer and poet André Bjerke. He wrote children’s books, poems and psychological mystery novels in the 1940’s.

Do you have any advice for aspiring writers?
I did these writing courses for school kids in Norway after I got published and saw all the raw talents that were out there, young girls and boys that reminded me of myself at that age. I used to tell them to forget the “good student” type of writing and find their own expression, their own way to tell a story, to portray characters, their emotions and so on. Because that is what readers (and publishers) are looking for: something unique, different. That, and to edit, edit, edit and edit.

What’s been your proudest moment as a writer?
This one, most definitely😊 Being published in the UK, the land of Agatha Christie, Colin Dexter and C. J. Sansom, among so many others. Though, I must admit that my new favourite author is actually Irish: Adrian McKinty. The Sean Duffy series: wow, just … wow!