Our final guest today is the rather brilliant Rob Walton.

Many people on the North-East writing scene will know Rob thanks to his performances at The Stanza as well as his involvement with Free as a Bard.

I’ve had the pleasure of working with Rob this year for our Christmas ghost stories at Old Low Light.

As you may notice, Rob has added in a few extra questions – we hope you enjoy them. My thanks to Rob for taking the time to share his year with us. 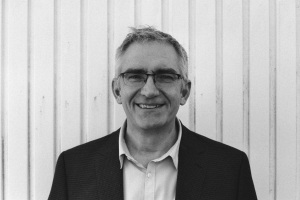 Do you have a favourite memory professionally from 2017?
It’s difficult to pinpoint a moment, so I’ll go for a time of year.  Autumn going into winter was great in that I had several acceptances and publications in magazines and anthologies within a short apace of time.  What was particularly gratifying was that (a) people were liking things I’d reworked or sent out again after editing and (b) a range of stuff was accepted – a children’s poem, creative non-fiction, poetry, short stories and flash fictions.  All felt right with my writing world.  Until the next rejection of course.

Also, there were many lovely performance nights with wonderful hosts.  Once again I gate-crashed one of the lovely Vic Watson’s evenings, this time I read a Dickens’ mash-up Christmas ghost story.  I had some quirky firsts too.  I worked with Russ Coleman to cast some words in concrete.

Then there was a concrete poem in a wonderful quirky book and an aperture poem courtesy of Sidekick Books.

And how about a favourite moment from 2017 generally?
This straddles the personal and the professional.  Not a moment, but rather the ongoing friendship and support from various writerly people hereabouts.  I hope they know who they are.

Favourite book in 2017?
I read and really enjoyed some great work by writer friends, but I wouldn’t want to miss any of them out – Paul Summers has got a vicious temper and Harry Gallagher’s got a bow and arrow –  so I’ll go further afield.  Not all of these were released this year, but I read them in 2017.

Jan Carson’s Postcard Stories from the Emma Press was also great.  Every day in 2015 she wrote a story on a postcard and sent it to a friend.  The highlights are collected in the book.

Short stories: I’m going for Danielle McLaughlin’s Dinosaurs On Other Planets.  My partner heard one on Radio 4 and got me to listen to it, and then bought it for my birthday.  It’s bloody brilliant.  Spend your Christmas money on it, whatever Christmas money is.

Ali Smith’s Public Library and other stories also went down a treat.  I think she’s brilliant.

Poetry: I found a copy of Kim Moore’s The Art of Falling in North Shields Library, and was seriously impressed.

Memoir: it has to be Thatcher Stole My Trousers by Alexei Sayle.

Favourite film of the year?
It’s go to be The Florida Project.  I saw it at the Tyneside with a load of older folk eating sandwiches.  Of course I wouldn’t do that – I had sandwiches and crisps.

Favourite song of the year?
I don’t know about a specific song but there were some real gems in Luke Haines’ set at The Cluny 2 in May and, continuing with the live theme, Sleaford Mods were great in the autumn at the old Poly Union building, whatever it’s called these days.

Favourite cake of the year?
That would be the rhubarb crumble one with the sticks Steve and Sam gave us, grown in the City of Culture.

Any downsides for you in 2017?
I discovered that a woman in Lerwick is challenging my claim to being the inventor of cheese.  And my right hamstring’s been tighter than I would like.  Then there was the Untied Kingdom thing.

Are you making resolutions for 2018?
Going to keep more secrets, and be sick in more handbags (and deny all knowledge).

What are you hoping for from 2018?
Professionally: get a flash fiction collection together.
Personally: hope my daughters’ transitions from primary to secondary, and secondary to sixth form go smoothly.
Pugilistically: take it on the chin.

Posted in End of Year Reviews, Review of 2017