Too tall for love? No way!

It has been reported today that Stephen Merchant, Ricky Gervais’s side-kick (the one that isn’t Karl Pilkington), has said that at six-foot-seven he thinks he’s too tall for love.

What nonsense! But I have to admit, at nearly six-foot myself, there was a time when I believed that I was too tall to find a boyfriend.

When I was eighteen, my five foot seven boyfriend dumped me and I realised that, in the future, I wouldn’t be dating someone shorter than me. I decided that, ideally, I’d like to have a boyfriend who was tall enough to still be taller than me should I decide to model one of my many pairs of high-heeled shoes. This seemed quite an ask.

Height was just another requirement on an ever-growing list. Along with intelligence, humour, manners, kindness, similar morals and beliefs, I thought a man with these qualities would be impossible to find.

But then I met The Boy Wonder and I realised that whatever you are looking for does exist but you have to be patient. Stephen says he’s looking for a woman “with the body of Kelly Brook and the mind of Stephen Fry”. If I wasn’t with TBW, I’d be very interested in the fact that Mr Merchant was single – but then again, I don’t have a body like Kelly Brook.

Posted in About Me, Celebrities 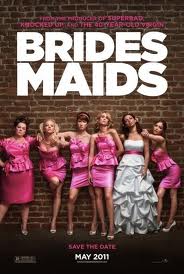 When I saw the critics calling this “the female Hangover” I thought it was just a buddy movie for girls. I didn’t realise it was literally going to be like ‘The Hangover’ with plenty of swearing, arguing and toilet humour. I should have known when I saw Judd Apatow’s name on the poster.

‘Bridesmaids’ focuses on Annie, a thirty-something singleton who is at a low point in her life since losing her dream bakery, her boyfriend and all of her savings. Annie shares an apartment with Matt Lucas and his crazy sister, resisting her mum’s advice to move home. Only her friendship with Lillian (played by Maya Rudolph) keeps her going. When Lillian gets engaged she asks Annie to be her maid of honour. Lilian also has her sister-in-law-to-be (the best character in the film), two other friends and her fiance’s boss’s wife – Rose Byrne plays Helen – as bridesmaids. 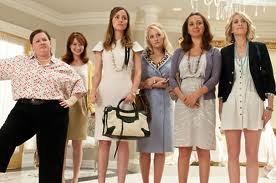 What follows is a silly but funny, and scarily accurate portrayal of female relationships. Helen and Annie are clearly jealous of each other’s friendship with Lillian but have to spend a lot of time together in the run-up to the wedding. Helen is rich and vain with connections Annie could only dream of. Helen gets the girls into a bridal shop without an appointment, books tickets for a hen do to Las Vegas and overrules Annie at every turn.

Throughout this, Annie is still trying to put her life together, doing a crappy job, seeing a bloke who doesn’t respect her, flirting with a guy who is so much nicer (The IT Crowd’s Chris O’Dowd) and being evicted but Lillian isn’t around to talk to. 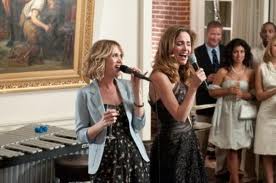 These set-ups provide some genuinely funny and sad moments. I personally enjoyed the jokes that involved less vulgarity but that’s personal choice. I was surrounded in the cinema by women crying with laughter. What I liked about ‘Bridesmaids’ was that it was so realistic in its portrayal of women and their relationships with each other. We’ve all known a Helen and have often felt like Annie. We do have bodily functions, swear and have sex. It’s silly and sentimental – so are we.

This film will not only apply to women but also men, no mean feat.