Today’s special guest is Chris Ord, writer of ‘Becoming’ and ‘The Storm’. Earlier this year, I had the pleasure of chairing a panel featuring Chris, Danielle Ramsay and William Prince.

You can find Chris on Facebook. My thanks to Chris for taking the time to review his year, it’s always a pleasure hosting you, Chris. 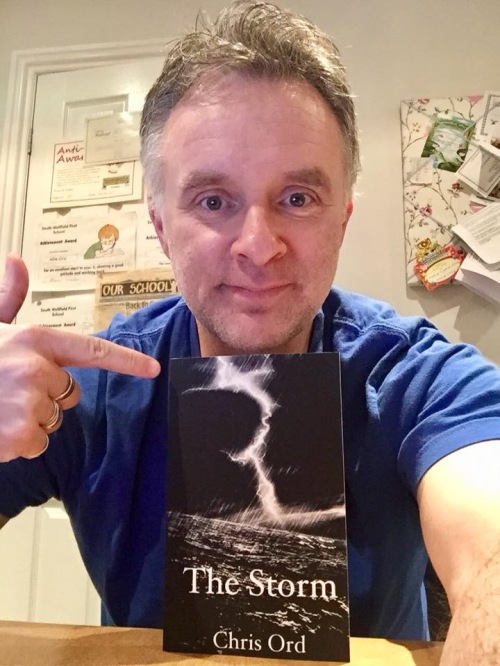 Do you have a favourite memory professionally from 2018?
I released my second novel, The Storm in January. It is based on a true story and was inspired by a musical project I was involved in. It is about ‘Big’ Philip Jefferson, the first Newbiggin Lifeboat Coxswain who was awarded a clasp to his silver medal for an attempted rescue of the Norwegian brig ‘Embla’ in 1854. The rescue is the backdrop for the novel, however, the events of that night are only the starting point, as the book weaves this together with a folk tale, and a series of mysterious incidents to create a tense, supernatural thriller.

It’s gone really well. After the customary book launch I’ve appeared at several reading events and featured in regional and national magazines. They ran an article in Living North about it and gave it a glowing review. I was proud of that one. These things make all the difference for a writer. You plough away in self-doubt and isolation writing the story you love, and your hope is that others will love it too. When the feedback tells you the risk and sacrifice, the blood and tears were all worthwhile. It’s priceless.

And how about a favourite moment from 2018 generally?
I saw ELO recently. It was at the arena which is not a good music venue in my opinion. Initially it put me off, but I bought a top whack ticket at the last minute. I was bang in the centre, in the fourth row, a cracking seat. They were incredible, one of the best live musical experiences I’ve witnessed. I go to a lot of gigs and have seen some of the very best artists over the years, and they were up there without question. Jeff Lynne still has the voice and, of course the wall to wall hit tunes. He has surrounded himself with musicians of the highest quality and capped it off with a superb light show.

My dad loved ELO, and introduced me to them in the first place, many years ago. It was a moving concert for me for that, and lots of other reasons. Perfect. Music always provides my annual highlights. I can’t think of anything better than music.

Favourite book in 2018?
Don’t Skip Out On Me by Willy Vlautin. Willy is the singer and main songwriter of the bands Richmond Fontaine and The Delines. I love his music and writing. There was a film released this year based on one of his novels, Lean on Pete. But for me Don’t Skip Out On Me is his best yet. It’s about a young Mexican Ranch hand who dreams of becoming a boxer. He leaves a loving elderly farming couple, who have taken him in as their own, to pursue his dream with tragic outcomes. It’s a terrific novel with well-drawn characters that creep under your skin.

So much of modern literature is style over substance, but this is traditional storytelling of the highest order. It reminded me a lot of John Steinbeck, who I love. I’m always far more interested in story than style. Literary work has its place, but I read to escape, be thrilled and entertained. A lot of literature seems to be pumped up by the marketing machines, and prize winning circuits and gains momentum via the in-crowd. Just give me a good yarn that takes me to another world for a few hours, makes me laugh, cry, scares or excites me. I aspire to be an accomplished storyteller as much as a writer.

Favourite film in 2018?
I loved You Were Never Really There with Joaquin Phoenix. It’s a dark and brutal film about a hitman with a hammer who gets himself into a tricky situation when he takes on a job which spirals out of his control. Phoenix makes the movie with another captivating performance. I can’t think of a better screen actor at this moment. He’s one of those I will watch the film simply because of him. Some may find the film too brutal, but I’ve never been put off by gore or brutality. Readers of my work will know this.

Favourite album of the year?
God’s Favourite Customer by Father John Misty. What can I say other than I adore everything Josh Tillman does. He’s adopted the persona of Father John Misty in order to liberate himself creatively. I find this intriguing and it reminds me of my favourites artists like Bowie, Gabriel, and Bush all of whom have played theatrical roles in their work.

People have often asked me if I would write under a pseudonym. Who knows, maybe I have! It’s an interesting proposition and not something I’m averse to. It has risks commercially as you have built up your fanbase and people will engage with your work because of who you are, and what you have written before. However, it could offer the opportunity to take a few more risks and try different things.

Integrity is everything for me. It’s what attracts me about the indie route above all else. All creatives are searching for the truth, their own truth. You hope that others will relate to that truth and there is a degree of universality to the human experience you have captured. Adopting a persona would allow you to explore a different perspective and present the story from an alternative world view. It may compromise on authenticity, which is part of the risk. I’m more and more attracted by the thought when I encounter artists like Tillman.

Seeing the world in new ways is an important part of our development as people. I believe one of the main problems today is that so many struggle to see the world from other perspectives, or at least recognise the validity of different views. There are too many that think theirs is the one and only accepted truth and should be everyones. Tolerance and respect are being undermined by populists and illiberal liberals alike. Maybe we all need to try a different persona now and again, or show a bit more empathy and compassion at least. I saw a powerful quote this year which stayed with me, ‘Stay kind. It makes you beautiful.’ I’m going to try and remember that one.

Any downsides for you in 2018?
I haven’t written as much as I would have liked this year. Like many writers I’m only able to sustain myself financially in bursts. It’s feast then fallow. I wish at times it was different, but few write to be rich, it’s more important to seek the integrity I spoke of earlier. Integrity doesn’t pay yet bills though. As such, I have to take on contract work to meet all my family commitments, and I have a large family of four boys!

It’s difficult to find the time to write when you’re working, but I’m also a musician and play in a band. I love playing and it’s important to me. By the time I get in from work, do all the family things, and practice my horn, there isn’t much time remaining to write. However, I have hit a bit of momentum again of late. This has been driven by the passion and excitement I have for my latest work in progress. These are the moments you look for and have to make the best of. So things are looking positive again, and sometimes you need the lows as a reminder and a springboard to greater things.

Are you making resolutions for 2019?
Yes, I’m an obsessive planner do the New Year offers ample opportunity for me to indulge in ‘things to do’ lists. I will be finding more time to write, and play my music. I run regularly and hope to get a couple of half marathons done this year. I also want to go to a few more gigs. I go to watch music a lot, but this year has been a bit quiet. There have been some highlights, but I think I may need to look further afield this year. So family, music, writing, running. In that order. Same as it ever was.

What are you hoping for from 2019?
I have two books on the go at the moment. One is the follow up to my debut novel, Becoming, the other is something new. If I get my act together both may see the light of day in 2019. One is at the editing stage, but needs a bit more polish. I need to keep up the momentum I have found and find a regular pattern for writing, make the time, little and often. Hard work and discipline are talents in themselves. You need both to be a writer or the words never get anywhere. I need to keep reminding myself of that in 2019. I will. It’s going to be a good year. I promise.

**The Boy Who Wasn’t There Blog Tour** Guest Post

It’s the second day on the blog tour for ‘The Boy Who Wasn’t There‘ by Emma Clapperton. I’m really thrilled to be supporting Emma on this mini tour for the latest story in her Patrick McLaughlin series. Emma’s here to tell us more about her latest project.

My thanks to Emma for having me involved. 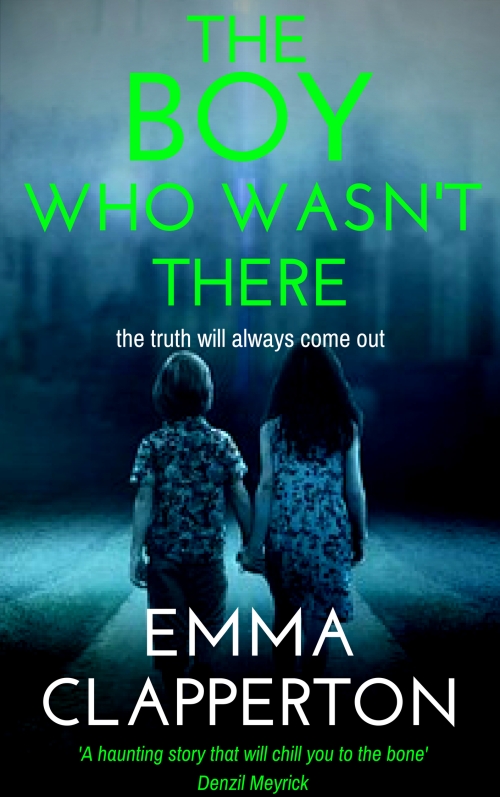 I had the idea for a supernatural crime series back in 2010, when I created the characters Patrick and Jodie McLaughlin, two psychic mediums living in Glasgow.

Since 2012, I have released two full novels and two short stories as part of the series, The Suicide Plan is the first in the series. Then we had Beyond Evidence, The Dead Whisper and now, The Boy Who Wasn’t There.

The Boy Who Wasn’t There came to me on the idea of children who have the gift and I wondered what would happen if the child were to present behaviours similar to that of an adult who was able to communicate with the dead.

The Boy Who Wasn’t There is a story of betrayal and loss and how one event in your life can change your course. Without giving too much away, I actually really like the character, Rita. She is at the lowest point she can be at and needs comfort from the bottle.

I like writing with two or more storylines running adjacent to one another and then merging them, because I love the idea that this could really happen.

I write in the style of what I like to read and that’s how I created The Boy Who Wasn’t There. I also work with young children in the early years sector and so adding that element was fun.

The novella is a short read at just 17,000 words and I really love writing in short bursts like this.