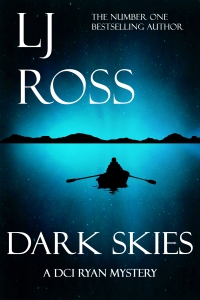 One fateful, clear-skied night, three friends embark on a secret trip. Only two return home. Thirty years later, the body of a teenage boy rises from the depths of England’s biggest reservoir and threatens to expose a killer who has lain dormant…until now.

Detective Chief Inspector Ryan is back following an idyllic honeymoon with the love of his life but returns to danger from all sides. In the depths of Kielder Forest, a murderer has evaded justice for decades and will do anything to keep it that way. Meanwhile, back at CID, an old adversary has taken the reins and is determined to destroy Ryan whatever the cost.

As usual, LJ Ross excels in her descriptions of the landscape where the story is set. What I really like about the DCI Ryan series is that LJ Ross sets macabre discoveries and heinous crimes in beautiful locations, ‘Dark Skies‘ is no different in that respect.

Add to that a number of intriguing sub-plots and a recurring cast of compelling characters and it’s no wonder that this series is one of the most successful in recent times.

With ‘Dark Skies‘, however, there’s a new element to the series with malevolent forces within the force bringing extra tension to the narrative.

As with the previous novels in the series, there are some unresolved issues which will undoubtedly keep readers hungry for more.